SCRATCHING POSTS COME IN ALL SIZES AND SHAPES
A scratching post is essential for any healthy, well-adjusted cat. 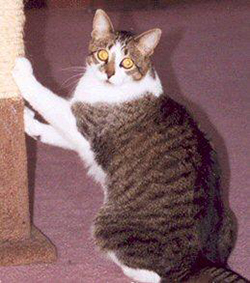 Obtaining a suitable scratching post is important. But bear in mind that your idea of suitable post and your cats may not coincide.

There are horizontal scratchers for carpet-lovers, wedge shaped ramps for cats who scratch low on furniture, and upright posts for cats that like to stretch.

A favorite material of choice is a corrugated cardboard. Economical cardboard posts are easy to replace and appeal to many cats. They usually lie flat on the floor and may come with a toy attached. Cardboard posts should be large enough for the cat to stand on them and scratch at the same time.

A post covered with rough sisal rope is another popular option. Sisal posts do cost a bit more than disposable cardboard ones, but they’re durable and last for years before they need replacement.

While a scratching post covered with carpeting accomplishes the same purpose as sisal, it often resembles the carpeting found on staircases and floors. It’s hard to teach your cat that scratching “this” carpet is “OK,” but “that” carpet isn’t.

Make sure the post is sturdy enough for your cat. In order to fully exercise his upper extremities and get a good stretch, the cat must have the confidence to put all of his body weight into it, usually going for the highest reachable spot on the post. If the post is too small, wobbles or tips as he pulls he won’t go back to it.

Another factor to consider is the height of the post. Cats reach upward and pull down against the post, so a cat’s post should be at least half again as tall as he is to allow him to stretch (24”-32″) works best. The taller and more sturdy the post, the greater the chance your cat will prefer the post to a couch or armchair.

You may need several posts, depending on how many areas he likes to scratch on. If he goes for both arms of the couch, then that’s where you will want your posts at the start. It’s also a good idea to put a post where your cat sleeps. Cats like to scratch when they awaken, especially in the morning and the middle of the night. If space permits, put a scratching post in multiple rooms in the house.

Placement of the scratching post plays a role in a cat’s acceptance of the post. Many cats that scratch furniture choose a prominent chair arm or table leg, so anyone entering the room or home will know immediately whose territory they’re in. Placing a scratching post in a prominent location in the most used room in the house, even directly in front of the piece of furniture the cat has shown a preference for, will often encourage the cat to scratch the post to mark his territory.

A scratching post should be in an area that’s used by the family, not hidden in a back corner. After a time you can move the post away to the periphery of the room, but you’ll need to do this gradually. Initially, put the post where your cat goes to scratch. You may need more than one post to cover her favorite spots.

The best time to train your pet is when it is still a kitten. But if you have a cat that is already scratching the furniture, it’s possible to break this habit and train it to use a scratching post. Some cats will instantly take to a scratching post and know how to use it straight away, while others will need guidance.

Never try to push your cat’s claws into the post as demonstration. This will only frighten them. Encourage your cat to use the post with enticements. Feed her and play with her by the post. Rub dried catnip leaves or powder into it. Reward her with a favorite treat when she uses it. Have her chase a string or a toy around the post or attach toys to it, which will result in her digging her claws into it.

If the cat is having a hard time accepting the post, try daily sessions where you make the sound with your fingers of scratching on the post, accompanied by praise, and a treat to reward the cat as soon as he performs the desired action. This is important; the positives must be heaped on the cat while he performs the action.

Never scold or punish your cat and always praise good behavior. This is how your cat will learn that the scratching post is the best place to exercise those claws.

Working to get your cat to embrace the idea of a new place to scratch is a slow procedure. It must become a part of their habits, which takes time. As the cat uses the post more, you can begin to lessen the aversive measures. You must employ these deterrents while she is scratching for them to be effective.

If she starts to scratch an inappropriate object, immediately place her in front of her scratching post and begin petting her. Some cats will begin kneading when petted, thus digging their claws into the desired surface and establishing this as a fine place to scratch.

The human furniture must become unattractive to your cat. Covering the area with aluminum foil or double-sided tape is a great deterrent. These surfaces don’t have a texture that feels good to scratch. There are sprays on the market that are safe for you to use on your furniture to make it less appealing to your cat. Cats have an aversion to citrus odors. Use lemon-scented sprays or a potpourri of lemon and orange peels to make her former scratching sites less agreeable to her.

Never scold or punish your cat and always praise good behavior. Techniques like using a water gun, spray bottle, or pebble-filled can may or may not help. In fact, such punishments may teach a timid cat to be more afraid of you, as well as the object. Aversive techniques work well with positive reinforcements and when the cat is provided with an alternate surface that is equally acceptable. This is how your cat will learn that the scratching post is the best place to exercise those claws.